Where should the piezoo be put?
Even ideal scientific calibrated acceleration transducer will only reproduce the “sound” of the place it is attached to.
But no particular part of an instrument vibrates like the whole instrument, so the bug will only reflect a very small part of the instrument´s vibration. Maybe helpful if you are looking for a buzz, though.
But attaching a bug is also interfering with the vibrations of the instrument. 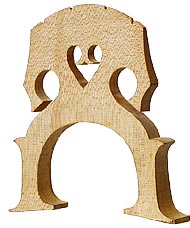 This cello bridge is much more than a pretty piece of wood.

Even worse, some common bugs are embedded in a violin bridge. Why is this bad, you probably think.
Explanation: the bridge transfers the vibration energy from the strings to the violin body. A plain slice of maple wood without cutouts makes a good acoustic violin´s sound very bad – I´ve tried. The violin bridge has all these intricate shapes, because the bridge´s cutouts makes it prefer some directions (modes) of vibration from the strings, and absorb others. So the bridge is really a mechanical filter, transmitting good vibrations down to the violin top and damping bad vibrations that stay in the bridge and heat it up a little. The last thing you want, is to feed the unwanted vibrations into a built-in piezoo pickup element because then you get – amplified garbage. Garbage in, garbage out, right?

I call them piezoo´s because in my ears they have a one note honky sound, like talking through a megaphone, with a constant buzz like a kazoo overlaid in the background of every note, especially when bowing.
Try this: find a readymade piezoo pickup violin with a decent acoustic sound.
The piezoo characteristics drowns the acoustic instrument´s sound, so a better instrument is just not heard in the electric sound. Worse, this also eliminates timbre, that is, the changes in the sound that you use to express different moods. Timbre is part of the life expression in music.

There is one exception, though.
Some pickups made for the double-bass can sound very unnatural in a *nice* way, – giving the bass player a more nasal and distinctive voice for soloing. But it´s still a one-note honky kind of voice with a very limited range of timbral expression, sorry.

Other vibration pickups
The moving coil vibration pickup, where a coil moving in a magnetic field induces an electric signal following the coil´s movements, like in the dynamic mike, but without using the air to push the coil back and forth.
Instead the inertia of the coil assembly´s mass is moving it relative to the magnetic field as the soundboard´s vibrations are shaking the bug´s housing. The increased weight may be a problem to the instrument.
It is also possible to use the condenser principle in a mass operated bug as well- just stick a very small mass onto the condenser´s microphone´s membrane, and close it off to air vibrations.